Back in the studio after lots of time working on other projects — OK, yeah, a little TOO much time.  Got a bit of an artistic block, I think.  Too many ideas, too little motivation. After all, my next show isn’t for another —-  FEW WEEKS!!!  HOLY TIME SINK, BATMAN!  While online project management stuff can be really good, it can take ALL OF YOUR TIME just to learn and organize.

In other words, procrastinate.

But it’s all good.  I’ve got show applications in and am starting to hear back on the earlier ones, at least through early May.  First one (unless I get REALLY stir crazy before then) will be in Morristown NJ – at the Spring CraftMorristown show again.  Then maybe Syracuse, maybe Gaithersburg MD, definitely Rockville MD, and WE’RE OFF!  Oh, uh, off as in Off to the Races, not off as in time off. Outdoor show season — I’m looking at another 20-25 this year. Watch my calendar for the latest updates.

Watercolor on paper with a layer of clear acrylic above it with the last chapter of Jules Verne’s Twenty Thousand Leagues Under the Sea written in ink as contour, texture and shading.

Octopuses (that plural doesn’t look right… is it?) are amazing creatures. Intelligent, curious, and alien. Well, not really alien, but kinda.  You understand, right?  Anyway, this piece isn’t part of my Endangered Species series, even though a few of the critters I’ve painted are classified as Threatened, including several of the coral reef species and the sea turtle. But this is more a celebration of underwater life, and how really stunningly different most of the rest of the planet is from our usual home environs.

Not that I’m saying that my home environ is anything to take for granted. On the contrary, I am DAILY thanking my lucky stars that I have what I do.  But I’m also incredibly grateful to be a part of this amazing planet, home to us and the beautiful alienish creatures we share it with.

Despite my best efforts to sabotage myself as a successful artist, I sold another piece of my artwork today.

Today was the second of the First Saturdays, a new venture to spread the joy of the Greater Ithaca Art Trail to the rest of the year. Because I’m technically “off the map” I don’t get a lot of visitors to my studio; hence I show most of my work at Salmon Pottery in Trumansburg the majority of the year. Last month I had no visitors, but that was OK… nobody had really heard of First Saturday Open Studio yet.  It was a good time to work quietly, or not-so-quietly, in the studio, working on a number of pieces in various stages of completion.  The studio was pretty much a disaster, and it was a good excuse to straighten up a bit.

For today, I pulled a few pieces off the shelves at Salmon to show in my studio; I realized that my walls are looking rather bare.  My new exploration into shadow art — etching poems into glass so that you can read the shadows in direct light — has been so successful that I’m having a bit of a hard time keeping things on the wall!  So, I needed more finished examples in the studio.

Two visitors came in on this bright and blustery day, and we had a lovely time (well, I did… I guess I shouldn’t speak for them) talking about art and travel and birds… I introduced them to my and Gordon’s artwork, and we kept talking while they looked around.  When the woman asked about pieces that are not for sale, I commented on the fact that there are a couple of pieces in the studio that do have NFS on the label… not at all thinking that what she was asking was “why don’t these have price tags?” and “how much are these pieces?”

Um, duh? The Art of the Sale class offered by the Ithaca Community Arts Partnership has been something I’ve been intending on taking, but for the same reason I hadn’t thought about putting my own price tags on my art or printing out the text for all of the pieces on the wall, I haven’t gotten organized enough to sign up.

Then, despite my complete inability to sell myself or my work, I sold Bronte’s Tree, a central image with the writing on the treetrunk on the back side of the glass so that the poem How Still, How Happy was written backwards.  I remembered where the sales book is, and miracle of miracles I remembered the password to my Square account so that I could accept a credit card.  I was hoping with all my will she would not ask what poem was written into the piece because I kept drawing a blank, and I had left the display text at Salmon Pottery.  She didn’t ask, but I promised to mail them the text.

She even granted me visitation rights, although I think that’s going a little over the edge… maybe a bit.

The Greater Ithaca Art Trail is holding its second of the new First Saturdays!  Come this Saturday, March 3, to any and all of the artists opening their studios to the public. 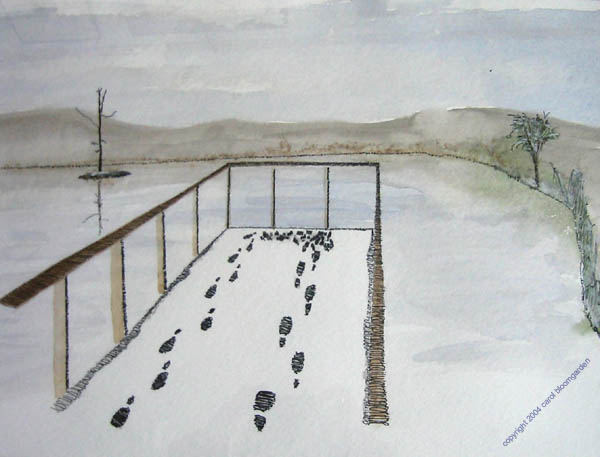 What the heck is an angwangtibo?  Here’s my take on the lemur-ish critter, using Rudyard Kipling’s poem, “Morning Song in the Jungle” as the text.  My second of two pieces so far using markers for the coloring.  Just for kicks. Text below.

“Morning Song in the Jungle”

OK, here’s a closer look, for all y’all wanting to try and read some of this, or at least to verify that it is indeed itty bitty writing: 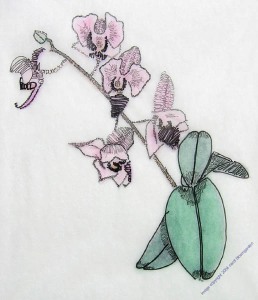 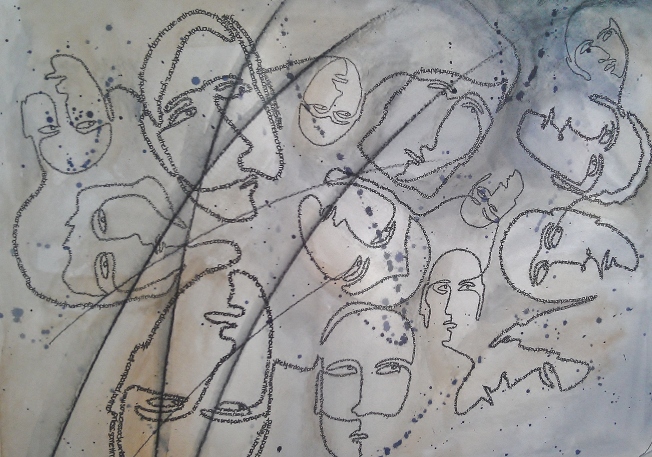 This piece is the first of three pieces based on Robert Burton’s wonderfully written 17th century treatise on “melancholia,” or what is more frequently considered depression these days. He was a very well educated and literate writer in the days before systematic study of human psychology, and explored the causes, symptoms and treatment of melancholy in a very lyrical and often humorous prose.

The artwork is my first using solely a single line from start to finish, including the border; I used different sizes of pens to get darker or lighter, finer lines.  It is also by far the easiest to read! Just pick a point and go.

I love the text for this piece (all the lines in the doors are text… sorry, but back then I wasn’t taking good photos):  “On Doors” by Christopher Morley

The opening and closing of doors are the most significant actions of man’s life. What a mystery lies in doors!

No man knows what awaits him when he opens a door. Even the most familiar room, where the clock ticks and the hearth glows red at dusk, may harbor surprises. The plumber may actually have called (while you were out) and fixed that leaking faucet. The cook may have had a fit of the vapors and demanded her passports. The wise man opens his front door with humility and a spirit of acceptance.

Which one of us has not sat in some ante-room and watched the inscrutable panels of a door that was full of meaning? Perhaps you were waiting to apply for a job; perhaps you had some “deal” you were ambitious to put over. You watched the confidential stenographer flit in and out, carelessly turning that mystic portal which, to you, revolved on hinges of fate. And then the young woman said, “Mr. Cranberry will see you now.” As you grasped the knob the thought flashed, “When I open this door again, what will have happened?”

There are many kinds of doors. Revolving doors for hotels, shops and
public buildings. These are typical of the brisk, bustling ways of
modern life. Can you imagine John Milton or William Penn skipping
through a revolving door? Then there are the curious little slatted
doors that still swing outside denatured bar-rooms and extend only from
shoulder to knee. There are trapdoors, sliding doors, double doors,
stage doors, prison doors, glass doors. But the symbol and mystery of a
door resides in its quality of concealment. A glass door is not a door
at all, but a window. The meaning of a door is to hide what lies inside;
to keep the heart in suspense.

Also, there are many ways of opening doors. There is the cheery push of
elbow with which the waiter shoves open the kitchen door when he bears
in your tray of supper. There is the suspicious and tentative withdrawal
of a door before the unhappy book agent or peddler. There is the genteel
and carefully modulated recession with which footmen swing wide the
oaken barriers of the great. There is the sympathetic and awful silence
of the dentist’s maid who opens the door into the operating room and,
without speaking, implies that the doctor is ready for you. There is the
brisk cataclysmic opening of a door when the nurse comes in, very early
in the morning–“It’s a boy!”

Doors are the symbol of privacy, of retreat, of the mind’s escape into
blissful quietude or sad secret struggle. A room without doors is not a
room, but a hallway. No matter where he is, a man can make himself at
home behind a closed door. The mind works best behind closed doors. Men
are not horses to be herded together. Dogs know the meaning and anguish
of doors. Have you ever noticed a puppy yearning at a shut portal? It is
a symbol of human life.

The opening of doors is a mystic act: it has in it some flavor of the
unknown, some sense of moving into a new moment, a new pattern of the
human rigmarole. It includes the highest glimpses of mortal gladness:
reunions, reconciliations, the bliss of lovers long parted. Even in
sadness, the opening of a door may bring relief: it changes and
redistributes human forces. But the closing of doors is far more
terrible. It is a confession of finality. Every door closed brings
something to an end. And there are degrees of sadness in the closing of
doors. A door slammed is a confession of weakness. A door gently shut
is often the most tragic gesture in life. Every one knows the seizure of
anguish that comes just after the closing of a door, when the loved one
is still near, within sound of voice, and yet already far away.

The opening and closing of doors is a part of the stern fluency of life.
Life will not stay still and let us alone. We are continually opening
doors with hope, closing them with despair. Life lasts not much longer
than a pipe of tobacco, and destiny knocks us out like the ashes.

The closing of a door is irrevocable. It snaps the packthread of the
heart. It is no avail to reopen, to go back. Pinero spoke nonsense when
he made Paula Tanqueray say, “The future is only the past entered
through another gate.” Alas, there is no other gate. When the door is
shut, it is shut forever. There is no other entrance to that vanished
pulse of time. “The moving finger writes, and having writ”–

Ready for professional photo and then off to be framed!  Total of five separate layers, spaced 1/4″ to 3/8″ above one another.  Really hard to show in a photo, but you can see where the shadows fall to tell what layer a certain piece of text or etching is.  The poem is called Evolution by Langdon Smith, and it is wonderful:

Look at (and buy!) stuff 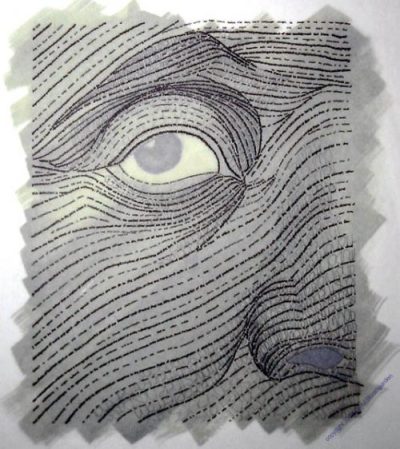